Great Egg Studio, conceived and co-designed with Dan McKay in 1991, utilized advanced acoustic construction and treatments with the assistance from an architect to ensure sonic isolation and accuracy.

Specifically, a structure was built within a structure to keep noise out and music in. With splayed walls and a cathedral ceiling, frequencies were distributed equally to minimize tonal resonance. This advanced studio design resulted in balanced and accurate recordings and mixes.

We were one of the forerunners in bringing professional grade audio production to a project studio in the early nineties. The studio featured a 24-channel D&R Dayner audio console, Tannoy far-field monitors, Yamaha near-field monitors, Apple desktop computer and an assortment of professional equipment from AKG, Tascam, Klark-Teknik and others.

Great Egg Studio with the ACS

Great Egg Studio was updated in 2002 to become more mobile. With the advancement in audio technology, equipment became smaller and the sonic quality better to allow us to record, mix and perform at different venues and facilities with the ease of mobility and compatibility.

The centerpiece of the studio was the Alonomorphic Control Station or ACS, which allowed for this flexibility. Created and co-designed with Chris Gately, the ACS was a customized mobile rig that featured a Yamaha 01V 16 channel digital console, an Eventide H3000 SE Ultra Harmonizer and other equipment from Sony and Roland.

With the addition of an Apple Powerbook G4 laptop computer, we were able to increase our sonic palette by recording and mixing at other studios, which complemented ours. The unique ACS also had the ability to connect our specially designed pedalboard to include effects, microphones and guitars for recording and live performance. Read more in Performing Songwriter magazine. 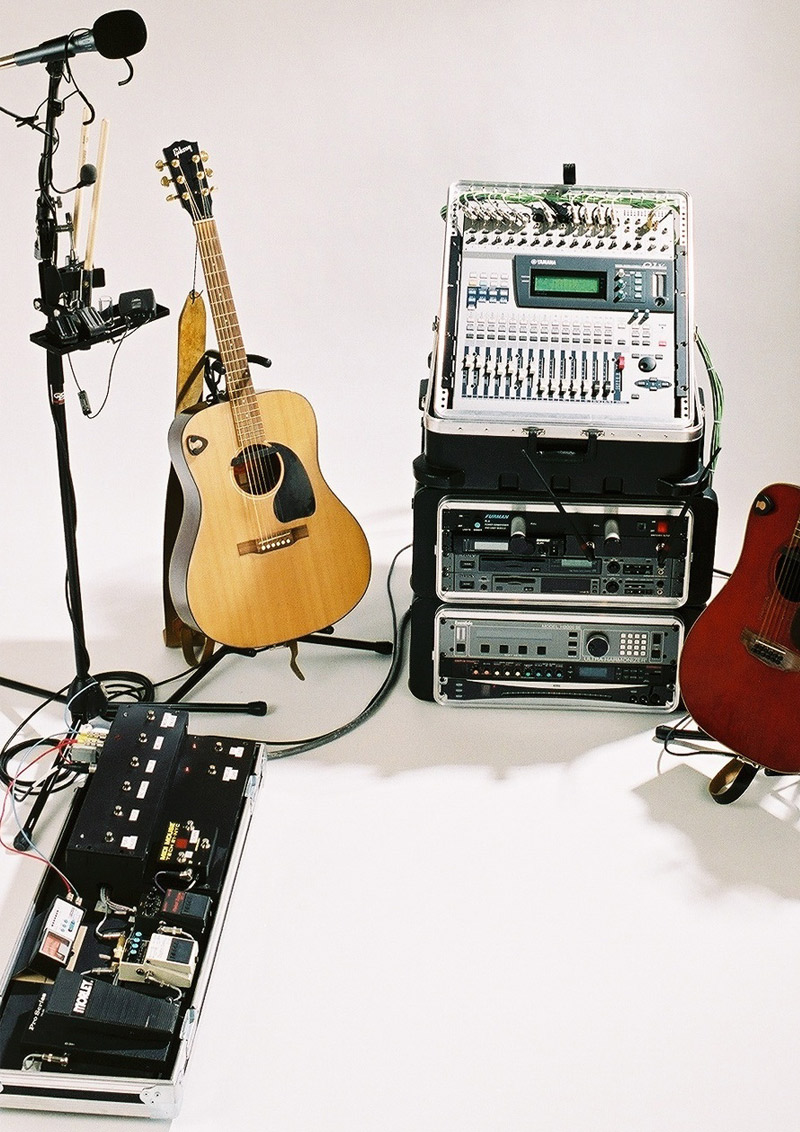 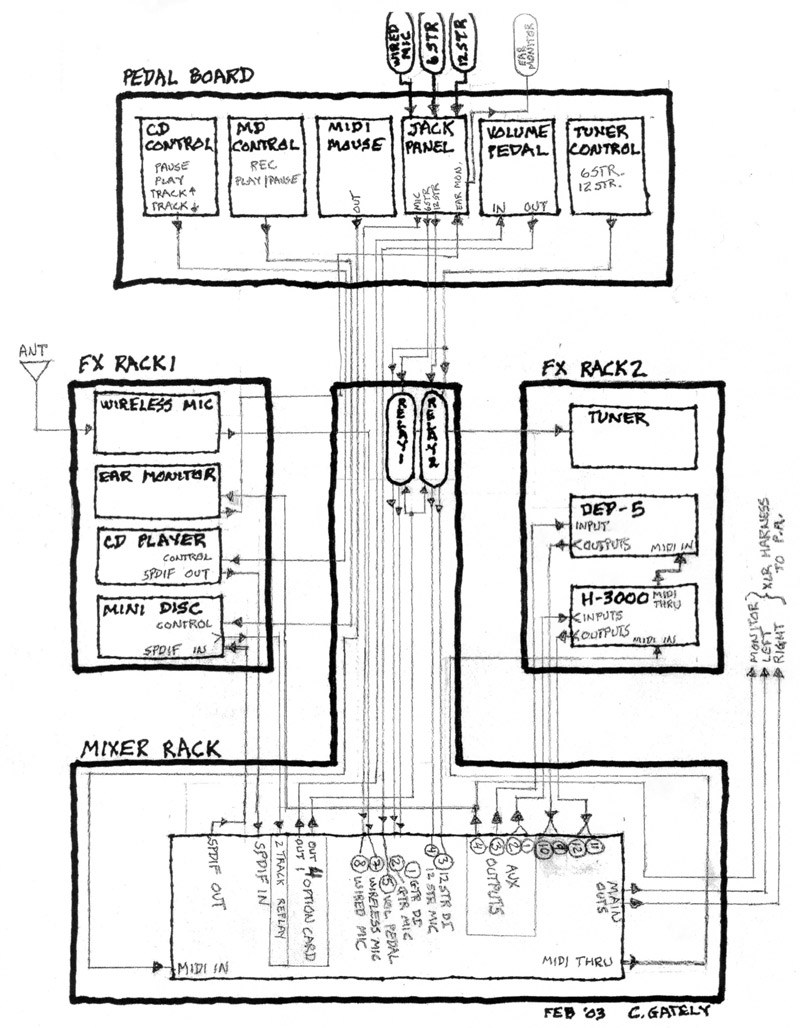 Imagine swirling delays, cascading harmonies, screeching distortion and other mesmerizing sound effects originating from one performer’s voice and set of acoustic guitars. This sonic presentation that takes on the aura of a fully orchestrated soundtrack is actualized by Alon’s proprietary, customized studio rig, “The Alonomorphic Control Station” or “ACS”.

These are all in part controlled by his proprietary, customized pedalboard that can activate CD playback, make MIDI program changes via the Tech 21-NYC MIDI Mouse as well as route audio signals to various processors through the Morley PVO Series Volume Pedal. There are two mute/router switches for each acoustic guitar, the Gibson WM-10 six-string and the Guild D212CH twelve-string. These guitars can be tuned on demand by the Korg DTS-1000 digital guitar tuner. His pedalboard also uses the Boss DD-6 Digital Delay and Metal Zone MT-2 foot pedals to affect his six-string acoustic guitar.

The “ACS” is all networked via Elco connectors. This allows for a quick set up and sound check. There are only three outputs, the mains (left and right) and monitor (mono). Additionally, this control station can record his live performances digitally via Sony’s Mini-Disc recorder, making it easy to compile the best recordings for future release.

His guitars utilize the Fishman Rare Earth Blend pickup with two audio outputs, a microphone and a humbucking pickup, to feed an array of processors. Additionally, he utilizes the Crown CM-311AE wireless headset as his main vocal microphone and the Shure Beta 87A as an alonomorphic microphone routed to pre-programmed delays, filters and harmonizers.

Great Egg Studio moved to a larger facility to include a recording space along with the control room. With the assistance from Chris Gately and David Ivory, we interconnected both rooms and installed the Apogee Ensemble audio interface, Focusrite ISA-828 microphone pre-amplifiers and Neve equalizers.

In addition, we’ve added an assortment of microphones from Electro-Voice, Beyerdynamic, AKG and Shure. With acoustical treatments to help isolate and control sounds, we can record drums, bass, guitars and vocals simultaneously.

Great Egg Studio also upgraded its desktop computer to the latest Apple Mac Pro which features a 12 Core CPU and 64 GBs of RAM. This provides significant horsepower to handle the most demanding recordings and effects processing. A 30-inch LCD monitor and an Avid Artist Mix 8 channel control surface complete the mixing desk.