A NEW SOUNDTRACK BY ALON, PRODUCED IN THE REBORN GREAT EGG STUDIO

Back in the early 2000s, I started a solo project called Alon. It comprised of songs and soundscapes with backing tracks channeled through a sonic rig called the Alonomorphic Control Station. 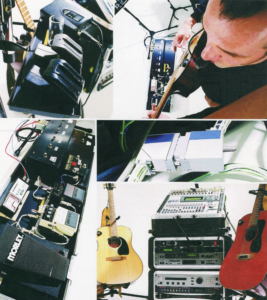 My instrument of choice was the acoustic guitar of which there was two, a Gibson six-string and a Guild twelve-string.

One novel device I used was an Ebow. Played on the six-string and embellished with a plethora of effects, the Ebow transformed my acoustic guitar into an otherworldly instrument.

After Great Egg Studio was destroyed by a flood in August 2020, I’ve cathartically composed a work inspired by this tragic event to convey the impact of climate change since I, myself, was a victim.

Over the summer of 2022 and with the assistance of Atticus Deeny and Steve Kubera, I created a soundscape which incorporates sound effects, the Mellotron and the magnificent Ebow. It was recorded and soon to be mixed in the reborn Great Egg Studio.

A motion picture with written commentary will also be produced to accompany this soundtrack which will delve deeper into the climate crisis.

This project is scheduled to be published in December 2022 and a new Alon EP is planned to be released in the summer of 2023.