Patrick Callen and Marc A. Gallo started BAG in Patrick’s apartment above Larry’s Pizza right next to the well-known Khyber Pass Pub on 2 Street in Philadelphia. With the unique distinction of utilizing a Commodore 64 computer to synchronize via MIDI a Yamaha drum machine with a Roland Juno 106 keyboard, BAG was perhaps the first band to perform live on stage with a computerized musical accompaniment in the Philadelphia area in 1985.

BAG could best be described as a zany, vaudevillian rock group. Incorporating costumes, props, video and unusual themes, their performances garnered much interest from their devoted following and local media alike. They performed at well-respected venues like The Painted Bride, Chestnut Cabaret, CBGBs (NYC), Revival, Kennel Club and others.

In 1989, BAG produced their first and only EP titled “Happy Family”, engineered by David Ivory. It featured an eight-piece band including horn section. Their record release party was held at the Chestnut Cabaret in Philadelphia with Andre Gardner as Master of Ceremonies from radio station, WYSP 94.1 FM.

Easter Day Live, performed at CBGB in NYC, was released by Great Egg Music on Friday April 10, 2020. It’s available on most music streaming platforms like Spotify and Apple Music. It was also featured on The Dr. Demento Show on Saturday April 11, 2020.

no1uno was an exclusively studio based band crafting songs and soundscapes from the sonic tools at hand. With the advent of the internet, they marketed their works via no1uno.com, and the distributor, CD Baby. They were based in Drexel Hill, PA USA.

no1uno released two CDs, titled “no1uno” (EP 1997) and “no1uno2” (LP 1999). The music is an eclectic mix of the following genres; industrial, electronic, grunge, ambient and folk. They produced the music video “free” from their first release and a dance mix for “free” by John Wicks from Third Story Recording in Philadelphia for the label, Great Egg Music in 1998.

Recently, they remastered their first self-titled release, no1uno and select tracks from no1uno2 with The Mastering House. Both were released in 2020. They’re available on all major streaming services such as Apple Music, Spotify and YouTube. Tracks from both releases were also featured on the Gagliarchives Radio Show.

down – the dance (remastered)

Starting as a singer-songwriter with a Gibson 6-string acoustic guitar, Alon quickly evolved into an elaborate sonic production. With the development of the Alonomorphic Control Station (ACS), a customized mobile rig co-designed with Chris Gately, his music integrated backing tracks with numerous musicians plus two independent microphones and acoustic guitars (a Gibson 6-string and a Guild 12-string) manipulated by automated effects to morph into his own unique sound.

Alon, aka Marc A. Gallo, performed in the Mid-Atlantic region including notable venues like Kenny’s Castaways (NYC), Tin Angel (Philadelphia), NEARfest 2005 in Bethlehem, PA and appeared on the Gagliarchives, hosted by Tom Gagliardi, a progressive rock station broadcasted worldwide.

He also was featured in Performing Songwriter and Progression magazines, the Prog Archives and NPR’s All Songs Considered.

Recently, Ode to Mothers, his live recording performed at the Tin Angel in Philadelphia, PA, and Time Will Tell (Radio Edition) were released. In addition, his EP, Persian Butterfly, was remastered and released on July 31, 2020. All were published by Great Egg Music and are available on YouTube, Spotify and Apple Music. 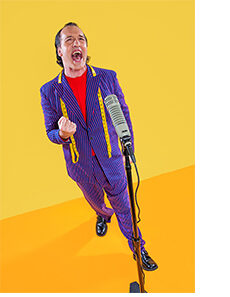 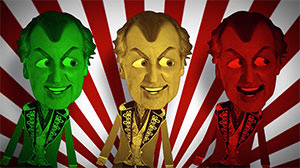 Gallospole, aka Marc A. Gallo, is a political satirist incorporating music, sketches and animation. He enjoys peddling conspiracy theories, alt realities and alternative facts inspired by the daily fodder in our society today or, what he coins, “the real, surreal and the un-fucking-real”.

Pushing the absurd to the extreme and turning conventional wisdom on its head, Gallospole is known for his Award-Winning political allegory TARAC WIPPP, an acronym for The American Right for Adequate Chair Width in Public and Private Places, and a host of other satires like Machiavelli Funeral Homes, where our Best customer is a Dead customer!